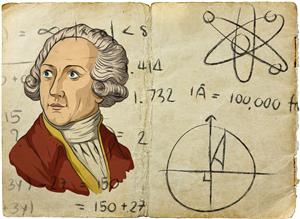 According to the "law of conservation of mass" of mechanics enunciated by Antoine-Laurent de Lavoisier (Paris, 26 August 1743 - Paris, 8 May 1794): "nothing is created, nothing is destroyed, everything is transformed". The theory resumes the thought of the pluralist physicists of Greek philosophy who believed that "nothing comes from nothing": in essence the union of the elements creates (apparent) life and the separation of the elements causes (apparent) death.
Indeed, Lavoisier, using a simple scale, noted that in an experiment in which some substances are combined, the weight of the mass of the new product obtained is equal to the sum of the weights of the masses of the reagents: there was no dispersion nor increase in mass, but the new product was something completely different from the substances used initially.
Almost a century later, precisely in 1862, Louis Pasteur (Dole, December 27, 1822 - Marnes-la-Coquette, September 28, 1895), in an attempt to increase the quality of French beer compared to German beer, discovered that the mushrooms and mold grown at outside the beer vats during fermentation at 20° C could be eliminated by bringing the beer to a temperature of 50/55° C and then cooling it down. This process of heating and cooling the food was called pasteurization which was later used by Napoleon III's army to treat the food of the troops and obtain a better conservation over time.
With different purposes, Gaulin worked on the development of a machine for the treatment of dairy products, in particular milk and butter. In fact, in 1901 he presented the homogenizer at the Paris World Fair. In milk, for example, homogenization has the aim of preventing the natural separation of the substances that make the product up. In fact, the fat molecules contained in milk tend to accumulate in the upper part, while water tends to accumulate at the bottom.
The homogenizer, causes strong and sudden pressure drops in the milk, causing the fragmentation of the fat particles into very small parts, thus increasing their stability in emulsion with the liquid.
At the beginning the success of the homogenization of the milk was very limited but, later on, it helped to create a more digestible product and improved the product’s characteristics (appearance and taste).
In short, similarly to what Lavoisier discovered, the process destroys the molecules to assemble them into a new product with improved characteristics.
In the case of milk, homogenization allows also to increase shelf-life and digestibility without altering its characteristics and without adding preservatives or chemical stabilizers. In fact, for each liter of milk we can obtain a liter of homogenized milk, without any addition. With the homogenization, nothing has been added, nothing has been removed, the product has only been transformed and improved: the outcome is amazing!
FBF Italia manufactures the homogenizers of the Buffalo series in compliance with the strictest sanitary regulations, anticipating market demand and customer needs. Each machine is subjected to the most demanding tests to guarantee the highest quality to our customers, both in terms of mechanical functionality and the benefits to treated product. Furthermore, a simple and quick installation makes the Buffalo homogenizers the perfect machine to be integrated into new or existing food processing lines.
Contact the area representative to make an appointment and get all the technical and commercial details on FBF Italia machines!